How to Prototype a Die Cast Part 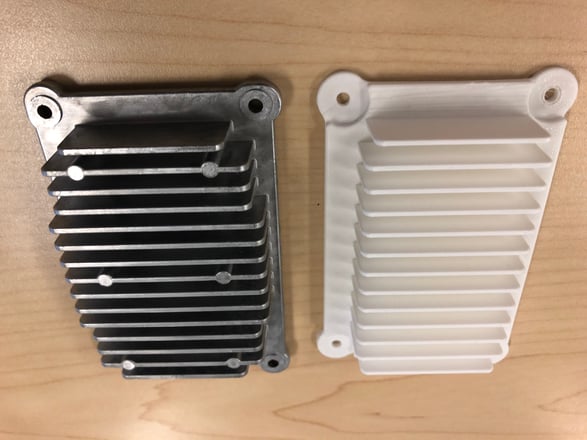 Customers often request prototype castings when developing new die cast projects.  We love when customers request a prototype because it is an excellent way to identify engineered improvements before production investment. Die cast production tooling prices can run up to six figures depending on the complexity of the tooling, so it is imperative that customers are confident in their design before production. There are 4 main methods to produce prototype aluminum die cast parts: single cavity prototyping, plaster prototyping, machining from solid and additive manufacturing. Below, learn the pros and cons of each method so you can make an informed decision when working on your next application.

Prototype dies will only have one cavity, whereas production parts may have multiple cavities.  At General Die Casters, we often build inexpensive unit dies to cast prototypes. These dies are created using soft steel which allows for faster construction time and lower cost.  We have successfully cast over 5,000 parts from these inexpensive prototype dies.

Plaster prototyping, also known as rubber plastic mold casting, is a method of producing aluminum, magnesium or zinc castings by pouring liquid metal into plaster (gypsum) molds. If your application requires special alloys such as 390 or 413 aluminum, plaster prototyping cannot be utilized. Plaster prototyping is an appealing option to customers because it has a lower initial tooling cost than a single cavity prototype die and also has a short lead time of 2-3 weeks. However, this method has limitations that should be considered.  Die cast parts are produced using high pressure, while plaster castings are produced by gravity pouring. This produces a casting with a much larger grain structure which impacts the mechanical properties. The mechanical properties of a plaster casting are only 70% of an actual die cast part. This can create complications when testing your prototype. If your part fails in the last 30% of your test, it is challenging to determine if the prototyping method is to blame or if your design needs reworked.

Machining from solid, also known as “hog outs”, is a manufacturing process where the prototype part is CNC machined from a billet.This prototyping method has a short lead time of 7-10 business days if you only need a few parts. A major downside to machining from solid is that this prototyping method has the highest piece price of any of the methods we’ve previously stated. Machining from solid cannot replicate the surface finish or mechanical properties of a die cast part and also makes it difficult to create curved surfaces and radii some geometries. This method can offer the lowest price point. If you need a small number of prototypes.

Additive manufacturing, or 3D printing, excels when a small quantity of complex parts is needed. It is an option to consider when a small number of prototype aluminum parts are needed.  The most common aluminum 3D printing method is Powder Bed Fusion. In this process a laser is used to selectively fuse aluminum powder which is layered in the machine bed. The most common powder additive manufacturing alloys are ALSi10Mg and ALSi12Mg.  These alloys are very similar to the die cast alloy 380. 3D printed aluminum parts require heat treatment upon completion to relieve the thermal stress created during the sintering process. These parts claim to have mechanical properties similar to a high pressure die casting.

What is the best option? Recently, we had an automotive customer interested in a prototype part for a new project. The customer wanted 100 prototypes to test. The following table displays estimates using the four prototyping methods.

In this scenario the single cavity die cast tooling is the most economical option.  Not only is it the most cost effective, but it allows for additional parts to be produced at the lowest cost.

Initial prototype testing often reveals improvements that can be made to the design.  With die cast tooling, it is possible to modify the prototype die to produce additional castings.  Depending on the changes, this can often be done at a minimal cost.

Prototyping is an excellent way to validate a design prior to production. At General Die Casters, we are proud to produce complex, high-quality aluminum and zinc die castings for a wide range of industries. Looking for die cast prototype parts for your next project? Contact us below and our team of experts will help you choose a prototyping method that best suits your application.

About the Author: Tim Tennant