Catching a lift: Church van program helps give workers a boost out of poverty

On a sunny Thursday in June, five Black men boarded a van at Sure House Baptist Church, a storefront church on Miles Avenue in the Union-Miles Park neighborhood on Cleveland’s east side. They were headed to Twinsburg, about a 25-minute ride, where a manufacturing company was hiring. 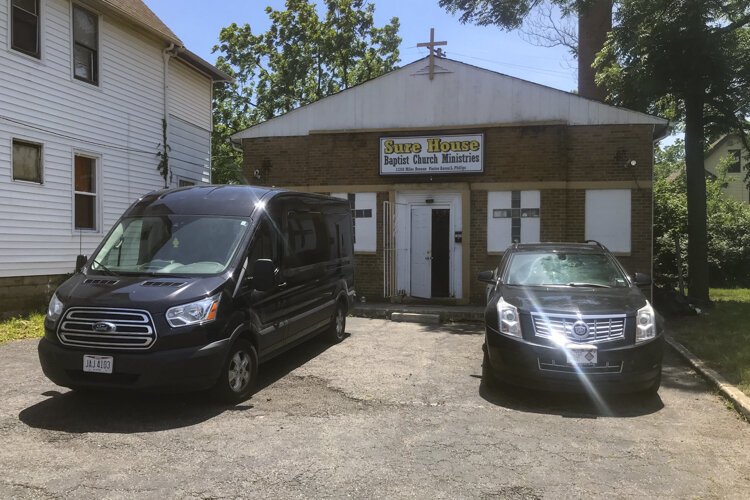 As they turned from Miles Avenue onto East 131st Street and then hopped onto I-480 East, Al Shivers, a deacon with the church, broke up the silence with some friendly banter.

“You can get a job today if you want it,” he shouted above the highway noise and the sound of the AC blasting cold air. “Your first paycheck will come to me, though,” he joked.

The men laughed nervously and fiddled with their phones or looked out the window as the highway lines blurred past and the landscape changed from gritty cityscape to shiny office parks. Three of them were unemployed. One was making $11 per hour working a warehouse job. None of them had cars.

They were there because General Die Casters, a custom aluminum and zinc die casting company in Twinsburg, was hiring entry-level workers with no experience for $15 per hour, with a $1 per hour bonus for working second shift and a $2 per hour bonus for perfect attendance all summer long. That was enough to catch their attention.

The problem was getting there. Public transportation either didn’t go there or was impractical, and a rideshare would eat up half their wages.

Shivers and other church leaders came up with a solution. They created a faith-based job training and transportation program that connects and physically transports Black workers to jobs.

Through the Cleveland Clergy Coalition, a coalition of Black churches in the Cleveland area, these church leaders recruit and train Black workers for good-paying jobs in manufacturing and other fields. They provide training in how to fill out a job application and prepare for a job interview. They then use vans to help workers complete the final leg of the journey—getting there.

“We’re not just transporting people to work,” Shivers says. “We call it door-to-door ministry. The whole thing was, ‘How do we better help our community?’ One of the best ways is to financially empower them.”

The church van program started two years ago through a partnership with Manufacturing Works, a nonprofit advocacy organization that helps grow manufacturing companies in Northeast Ohio.

It got moving when they landed a $100,000 Paradox Prize from the Fund for Our Economic Future. The Paradox Prize aims to “inspire sustainable solutions that can eradicate the 'no car, no job; no job, no car' paradox in Northeast Ohio,” according to its website. It awarded grants to eight organizations in 2019.

There were more than 8,000 open manufacturing jobs in Northeast Ohio last year, according to the nonprofit organization MAGNET. One of the more intractable problems facing manufacturers is the mismatch between the location of jobs and where entry-level workers live.

Many low-income and Black workers live in Cleveland and don’t own cars, but many jobs are in the suburbs—far from public transportation. The church van program aims to bridge that gap.

“It’s a huge problem on both sides,” says Aaron Phillips, pastor at Sure House Baptist Church and director of the Cleveland Clergy Association. “For the manufacturers, they have trouble getting and keeping people. For our people, the problem is jobs—they can’t get there. By the time they use public transportation, they ride the bus for two hours, and they still have to walk a mile and a half.”

The light bulb moment for Phillips came a couple of years ago when he and others realized they had church vans simply sitting in their parking lots.

The program launched just a few months before the pandemic and had to cut capacity to enforce social distancing but continued enrolling manufacturers and workers during COVID-19.

Currently, the group is serving 10 to 15 people per week.

“We use the churches as a hub and get the word out to the community,” says Phillips. “We’re able to recruit where other agencies can’t.”

Back at General Die Casters, the men entered a cafeteria area, where their job applications were collected and the plant tour began. James Sneed, General’s human resources manager, told them what they needed to do to work there: pass a drug test, ensure they don’t have violent felony records, purchase steel-toed boots, and show up to work on time.

Their first assignment would be the second shift, but after a few months, they could move to the first shift. There are bonuses for longevity and opportunities to move up over time.

One of the men raised his hand. “I have a felony from five years ago,” he said. “Drug trafficking. But I ain’t no violent person.”

“Okay, that’s something we can probably work with,” said Sneed. “We do take violent felonies seriously, though.”
Sneed says he likes the van program because it helps him recruit workers he wouldn’t otherwise get, at a time when the company is ramping up production and there’s a labor shortage.

“We’re probably about a dozen short among three shifts,” Sneed says. “We’re just like every company that’s having trouble finding people to work.”

Dominic Mathew, former urban and regional planner for mobility innovations with the Fund for Our Economic Future, says the church van program, although small, is ripe for expansion because it fills a need for both workers and employers.

“It’s exciting because workforce programs tend to work in their own silos,” he says. “Transportation is the last thing on their mind. This is an integrated program from start to finish.”

Interest among employers grew during the pandemic because of worker shortages and increased awareness of racial justice issues in the wake of George Floyd’s killing, Mathew adds.

“All the riders and volunteer drivers are Black,” he says. “There’s a huge equity piece in here that a couple of employers were attracted to. People wanted to diversify their workforce.”

Although the program is grant funded, Mathew sees a path to self-sufficiency. At first the entire cost was covered by the grant, but now employers and workers are paying a share ($10 a day for the employer, $5 for the rider). As the pandemic wanes and van capacity increases, the outlook will only improve, he says.

“If you can get 15 people into a single van, then economically and operationally it makes a ton of sense,” says Mathew.

One key adjustment was pivoting from a central pickup location to a door-to-door ride service. Philips and Mathew say it will get easier once they’re able to attract more riders and group them by location. They also aim to boost pay for the deacons, retired men who currently assist only in a part-time capacity.

During the plant tour workers donned hard hats and safety glasses as they learned the ropes and safety procedures on the plant floor, where heavy machines made metal parts for distribution all over the world. After 30 minutes, Sneed ushered the men back to the break room and took a few more questions, like where to get steel-toed boots—the answer was Walmart, for $23—before they got ready to head home.

“I hope to see you all back,” Sneed said to the men, who vowed to return. “I’ve been here 23 years. You can make a good living here. The hardest part of the job is you showing up.”

During the ride home, the men seemed eager to get started in their new roles. Shivers says the transportation program can be a lifeline and that General Die Casters had already hired several of the program’s trainees. Some of those workers are still using the ride share program, while others now have their own cars and are on their way to financial stability.

According to leaders, the church van program helped a total of 30 workers last year, eight of whom obtained full-time jobs at area manufacturing companies in the suburbs and six of whom are still employed there.

This story was produced as part of an environmental justice reporting initiative involving partners Northeast Ohio Solutions Journalism Collaborative (NEO SoJo), which FreshWater Cleveland is a part of, Ideastream Public Media, The Land, The NewsLab at Kent State University, WKSU, and La Mega.